Political philosophers and others have debated interminably about the relationship between equality, liberty, efficiency and the good society. But Wilkinson & Pickett provide a definitive empirical argument for the salience of equality of incomes for the well-being of a society and its members by tracing the relationship between inequality of incomes within a society and a host of social problems including mental illness (including addiction), murders, infant mortality and life-expectancy, obesity, children's educational performancre, levels of trust, teenage pregnancy, imprisonment, and social mobility. (About the only social problem that is correlated the other way, with increasing equality, is suicide.) 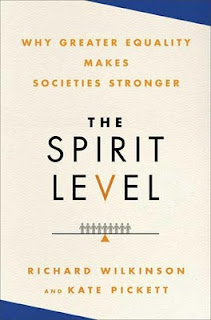 Wilkinson and Pickett look only at the top 20 richest countries to show that relative inequality still leads to poverty and social problems because inequalities in income are never just about money. They are always translated into social hierarchy and inequality, and people behave differently in a more hierarchical society. It even changes our physiology via stress hormones (think obesity) and politics via social distancing (think punitive criminal punishment).

They make a good argument for considering inequality as a kind of pollution that affects an entire society. In more unequal societies it is not only the poor who suffer (though they do suffer most), but every income group including the richest suffer more from these social problems than in more equal societies. Equality, it turns out, is in everyone's interests, not just the poor!

From this perspective, much effort to address particular social problems (via investment in policing, education, social work, etc) can be seen as flawed in its conception and unlikely to succeed even in containing the problems it is directed towards. There is an anology here to public health. The health care system, like the welfare state system, is directed to diagnosing and treating individuals' particular medical problems and is incredibly expensive. But all that spending and attention has made only a tiny contribution to our increased longevity compared to the investments we have made in cheap and basic preventative measures (such as sanitation and vaccination).

The lesson is clear: politics should address the root cause of these problems - inequality of income - rather than piecemeal interventions that try to break particular links between inequality and social problems (often rather half-heartedly).

Wilkinson's and Pickett's argument becomes a little shaky when they get to policy recommendations (part III) of the book. i.e. What we should do about inequality. Nevertheless I think one of the strengths of their argument is that it can, in principle, appeal to moderate conservatives as well as socialists, since both prefer to live in societies with more trust, social mobility, etc. For example, conservatives anxious about increasing government power or taxation may be prompted to reflect that an unequal state will spend far more on its self-created social problems - for example, imprisoning large numbers of people - which also seems a less pleasant use of state power and taxes than aiming for inequality.

If it is true that inequality in income is itself the real problem then there seem various paths to improvement via one or a combination of i) a more redistributive welfare state (the socialist inclination, as in Scandinavia); ii) more equal market incomes (the conservative inclination, as in Japan); iii) emphasising the collective production of high quality universal public goods to all citizens (like pre-school education and health-care) which do not have the stigma of hand-outs (see e.g. Claude Fischer). Reducing inequality seems a feasible rather than a utopian project since a number of rich countries with quite different political and institutional backgrounds already demonstrate that much greater equality is achievable. Those perfectly ordinary success stories should also reassure those who see dystopia lurking in any attempt to improve society.

Unfortunately, many of the countries at the top of the equality list have been becoming less equal in the last 10 years. This underlines the fact that equality does not come straightforwardly out of material progress but must be struggled for politically by an 'equality movement', preferably a coalition of the diverse groups who care about the well-being of their society and are convinced by this empirical argument despite their strongly differing views on the value of equality itself or the role of government.