The philosopher Vs. management theory

Matthew Stewart has a PhD in philosophy but despite this managed to get, and keep, a job in management consultancy. His book The Management Myth provides an entertaining and insightful analysis of the theory, history, and practise of that mysterious but ubiquitous cult of the modern world:  "management". 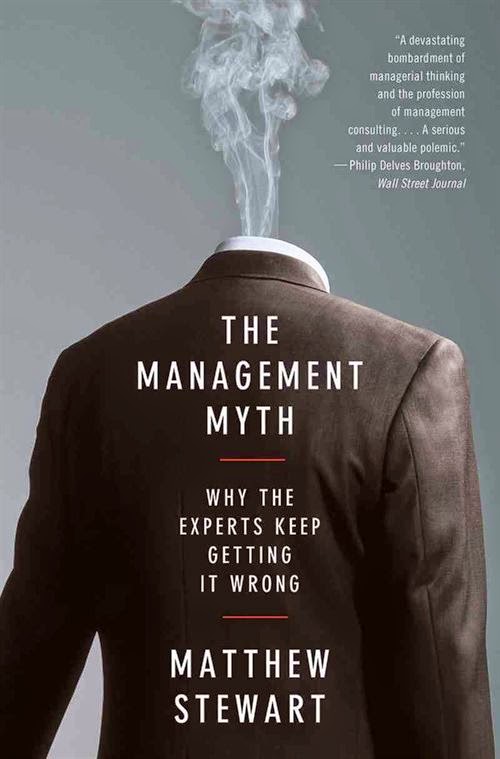 Stewart tears into the giants of management science, like Taylor and Mayo, as pseudo-scientific charlatans who thought that counting something made it into a science. And the business schools that lapped it all up because they needed an image of scientific credibility they could take to the bank. This is a popular book, but Stewart isn't afraid to let loose the philosophical distinctions, for example that "management science" commits a category mistake. Certain kinds of management tasks, particularly concerning logistics, can be systematically studied in a scientific way (most cannot), but "The word management stands in relation to these in the same way that technology stands in relation to LCDs, telephones, and inventory software. To study management in hopes of doing something immediately useful is like studying technology in hopes of building a better motorcycle (p. 54)." Delicious.

Management is fundamentally about getting things done through people: it's about power and the mediation of power - politics with a small p. But management theory masks the essential clash of interests between workers and bosses and pretends to find a win-win solution (that in fact always favours bosses). Whether it's Taylor's efficient division of people in the production machine into planners (bosses) and labourers (non-thinkers) according to their abilities (i.e. keeping the labourers in their place), or Mayo's emphasis on keeping workers happy (to get more out of them), the actual practical contribution of management science to business is close to zero (motivational platitudes aside), but the rhetorical contribution has been most convenient.

Indeed the invention of management theory has been most profitable for those who are selling it. Stewart's participant observer account of management consultancy is particularly interesting for its level of critical self-reflection (he didn't sell out on his philosophical ethos). Most of what consultants do is superfluous and could be done much more efficiently by the company concerned if it had the political will and focus (but sometimes they don't). Particularly amusing is the managerial incompetence of  consultants themselves, who generally have never actually managed anything more than a team of consultants and a secretary. Stewart's own company duly implodes like a slow motion train-wreck, in no small measure due to its very commitment to the pillars of management theory - deracinated knowledge (smarts without wisdom), self-confidence (hubris), obsession with process and technique; quantitative bias; and so on.

In the end, Stewart suggests, the appeal of management theory is emotional - about our human need to make sense of and feel in control over what in reality we have no control over, in this case markets and the disciplinary structures of modern corporations. Its motivation actually has much more in common with religion than science; the failure to recognise this is why its practical advice so resembles superstition. His analysis of the success of modern management gurus like Tom Peters and Drucker in analogy to the US market for evangelical Christianity - selling escape from existential angst - is particularly well done. Success in management, Stewart argues, is in the end not about mastery of some body of theory (science), nor of some set of techniques (training, also available via experience), but the result of a sound liberal education in the context of a sound liberal well-ordered and reasonably just society. Quite so.