Bad Arguments from History: The Case Against Free Trade 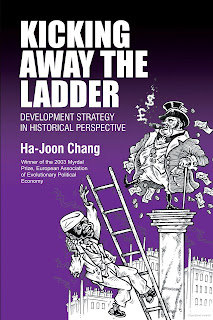 Ha-Joon Chang argues that there is a paradox at the heart of free trade economics: if it's so great why didn't the countries who are now rich do it when they were developing? My answer: because governments have always been willing to listen to protectionists like Chang who flatter their vanity and give intellectual cover to their venality.

Critics of 'neoliberalism', such as the heterodox development economist Ha-Joon Chang, argue in books like Kicking Away the Ladder that wealthy countries really got rich through protectionism; using tariff barriers and subsidies to nurture and develop their infant industries until they were ready to compete internationally (for the short version of Chang's argument see here). Therefore, we should stop telling developing countries to adopt the Washington Consensus of privatisation, trade liberalisation, deregulation, prudent macro-economics and protection of property rights.

The argument goes that historically the presently rich countries (like the USA and northern Europe) pursued protectionist rather than free-trade policies. At least until they were much richer (e.g. the UK switched to free trade in the mid-19th century). But none of this is news. Chang claims that he is challenging an entrenched view in mainstream 'neo-classical' economics, but he can't seem to mention many names. Indeed it would seem that he is attacking a straw man - an academic position that doesn't really exist. That may explain the style of the book, which mainly consists in the assembling of facts about economic regulations and statistics from the history of presently rich countries (at some tedious length) that prove that protectionism did take place. But Chang is signally unable to convert those facts into a proper inductive argument that protectionism was, and is, the best policy.

Modern economics begins with Adam Smith, and therefore with his scathing and systematic critique of protectionism and promotion of free - i.e. competitive - markets. Writing on the cusp of the industrial revolution, Smith identified much progress in the economic prosperity of ordinary people (and also freedom and justice) in northern Europe's transition from a feudal to a primitive commercial society. But he argued that the protectionist policies promoted by well-connected manufacturers and businessmen in the name of the 'national interest' were actually holding the British economy back from what it could achieve. He thought Britain had succeeded in spite of rather than because of them, and the real institutional drivers of increased productivity (i.e. wealth) were such unglamorous things as legal changes increasing the rights of tenant farmers, which gave them a reason to invest in improving their land (WN III.2.14).

Indeed Smith's cynicism about the political lobbying behind economic policy-making contrasts strikingly with Chang's naivete. Chang's idea of proving protectionist economics is to quote British Prime Minister Walpole in 1721 saying, "It is evident that nothing so much contributes to promote the public well-being as the exportation of manufactured goods and the importation of foreign raw material". Chang makes much of the fact that nearly all contemporary protectionism is promoted in similar terms. In contrast Smith's systematic analysis of the regulations and subsidies of his day showed that they only made sense from the perspective of vested business interests (i.e. business sense not economic sense), and all the public talk of  the 'national interest' was merely an intellectually and morally bankrupt rhetorical veil.

As Smith noted, the grand bourgeoisie are tremendously effective at recognising and politically promoting their narrow interests. They also tend to overpower the government's intellectual independence and convert it to believing the equivalent of 'What's good for Wall Street is good for America'. So the fact that politicians are continually rediscovering the rhetoric and policies of protectionism through the ages does not make it real economics. Rather, protectionist economics remains written by and for the business class. Hence Smith's term for it: "mercantilism".

Hence also Chang's paradox: it turns out that it is the nature of politics that makes free market systems very difficult to build and maintain, not their economics.

Smith argued, like other free-market economists then and now, that while crony-capitalism was better than feudalism, the economy would thrive even better under "the obvious and simple system of natural liberty". I.e. a state where the government steps back from micro-managing the economy (and people's moral and religious lives) and concerns itself with providing - or at least organising - public goods including national defence; an effective and accessible justice system; systemic regulation; universal education; transport infrastructure; etc. It is sometimes thought that this is small government, but actually it is a lot more government than Smith's Britain had, and much more government than poor countries now have. The real issue is about the type of government.

The free-marketeers do not say that protectionist economies cannot grow, only that with freer markets they would tend to grow faster. So for Chang to disprove that claim and show that protectionism was in fact the best policy in the development of the now rich economies (from the USA to S. Korea and Japan) requires more than showing that those economies did in fact grow under protectionism. It requires a counterfactual analysis showing that if they had properly adopted free markets, they would not have done any better. That argument is missing - where are the free-trade countries that failed? (Chang can only mention two countries that succeeded - Switzerland and the Netherlands)

All that Chang's historical argument demonstrates is that infant industry protection can have lasting effects on the shape of the economy. But this is obvious. Nor does it prove that protectionism is best theoretically or practically. For that one would need to consider the costs of such policies are as well as their benefits. Think of all those poor people having to pay higher prices for clothes so some politically connected 'patriotic' textile manufacturers can have a captive market to 'develop' their skills. Or scarce tax revenues being spent on subsidies to favoured manufacturing companies rather than public health and education. One would need to consider the costs of all the failures, like Saudi-Arabian wheat or Concorde, or The Olympics. One would need to remember that all economies must have some shape, and consider what other (perhaps better) shapes the economy might have assumed under different regimes. At least, that is what real economic historians do.

One of Chang's claims is that mainstream economists do not bother to take history seriously. It is true that they have a reputation for Whiggishness in their intellectual history - "Inside every classical economist is a modern one trying to get out"; "Adam Smith's Invisible Hand is really a primitive form of general equilibrium analysis"; etc. But Chang is hardly the best advertisement for serious heterodox economics history. Just like those he criticises, he starts with his beliefs fully formed and sifts through the historical material for evidence that conforms to that pattern. He neglects the historical economy - such as the internal reforms in the relevant countries that dramatically increased domestic free trade even while international trade remained restricted. He neglects the history of ideas - presenting  laughably crude representations of complex debates about public policy and economic theory. The resulting amateur view of history lacks proportion or perspective, as may be gleaned for example from his curious conclusion that "the American Civil War was fought on the issue of tariff as much as, if not more, [than] on the issue of slavery".


What puzzles me about heterodox economists like Chang is that they claim to be for the poor and justice (all that concern about 'kicking away the ladder'), but their actual recommendations favour crony capitalism at the expense of the poor. It is strange to see such smart people pointing to the fact that businesses captured government policy machines and advocated self-serving protectionism in developing economies in the past as something that should be recommended to poor countries in the present. Whatever the contested theoretical basis for infant industry nurturing in academic economics, the practice of protectionism is always a political matter. It is always called for and enacted in the interests of powerful politically connected vested interests (as with the chaebols in Chang's native S. Korea). It is only incidentally and accidentally beneficial to ordinary citizens.

Protectionism is dangerous as well as bad. It sees economic development in terms of a race between countries to gain enduring competitive advantages (again with the business ideology) rather than in terms of co-operative mutually beneficial exchange (economic ideology). That's the very attitude that undermines the spirit of the WTO, and leads rich countries to sue poor ones for copying medicines, etc. Protectionism might seem an allowable foible for middle-income and rich countries - consider for example Japan's obsession with home-grown rice - preferably democracies that can have the support of the people for those expensive white elephants. But there is overwhelming evidence that poor country governments cannot even provide (and frankly are often uninterested in providing) the 'minimal state' public goods like security, legal justice, public health, education, etc. for their peoples that Adam Smith believed was the proper role of government. So it it is utterly crazy and irresponsible to argue that what these countries' pathetic governments should be doing is taking control of their whole economy and gambling their citizens' future and present income on bets about future production technologies. The history of the last 50 years of development economics surely provides sufficient lessons about that.