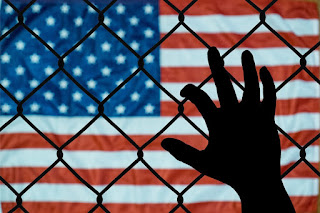 Immigration controls by rich countries are mean. They close out the poor and vulnerable who only want the chance to make a better life. They are characterised by arbitrary rules whose effects can be inhumane - breaking up families, locking up children, deporting good people to uncertain futures in godforsaken countries, etc. So the left is quite comfortable blaming conservatives for the whole idea. But in reality, social democrats need immigration controls for their cherished welfare state to function. They're just happy to let the conservatives take the rap.

Conservatives distrust new things and new people (OK, the nicer ones are merely skeptical). They want to keep our culture/way of life the way it is (or, more accurately, the way they think it was in their parents' time). So it is not surprising that they are often vociferous in their opposition to immigration. Those strangers won't fit in. Our country could change in terrible ways if those Irish Catholics, Pakistani Muslims, etc come in.

Social democrats find this cultural conservatism hard to understand and morally repugnant. Conservative pronouncements of cultural superiority and distaste/disgust for peoples from other cultures are invidious and an offence to the core liberal principle of universal respect for human dignity. But the left is necessarily just as committed to immigration control as conservatives, because of its commitment to the realistic utopia of a decent society with a safety net for all citizens. One cannot build such a welfare state in which everyone in our society has the right to health care, education, unemployment protection, disability support, pensions, etc without building a wall to keep some people out.


First, the welfare state has the financial structure of a giant insurance system. The economics only works for the pool of people it was designed for i.e. us. We have to keep out people with low human capital who won't be economically productive enough to afford the premiums our standards require. It also depends on assumptions about people's economic preferences, e.g. that women will be want to work outside the home and will be free to do so.

Second, the legitimacy of a welfare system depends on the perception of fairness and reciprocity. I pay taxes to protect people like me from suffering misfortune. I have to believe that the people asking for help would have contributed like I do except for their bad luck. The legitimacy of these taxes are undermined if the taxes are all taken from people like me, but the benefits go to people who seem to have chosen to become recipients. Legitimacy therefore requires that welfare systems be designed as closed systems so people can't choose between them on the basis of which gives them the most free stuff.

Third, the standards we consider the minimum of human decency cannot be extended to everyone in the world because we can't afford that. But unless we build a wall, we will basically be committing to such a universal welfare system to which anyone may apply. We therefore face a choice. Either we follow the Dubai (or apartheid South Africa) model and make a status distinction within our borders between 'real citizens' with welfare rights and non-citizens with no rights, which means that there will be possibly millions of people living and working alongside us whose children can't afford to go to school, or hospital, etc. Such an apartheid approach is morally repugnant. But the only alternative is guaranteeing high universal standards within our society, but building a high wall to keep everyone else out (with the exception of letting in a few thousand refugees per year to make ourselves feel better about our selfishness). This is what all liberal states have more or less chosen.

Finally there is naked self-interest. When we think about the welfare state, we normally think of it in terms of helping the poorest and most vulnerable members of our society through direct welfare benefits (redistribution), and the benefits to all from government organised services like public education, transport, and public health systems (public goods). But in fact middle-class people in formal employment receive an enormous indirect benefit through wage control. The biggest benefit welfare states provide to their citizens comes in their regular pay-packets as the premium for not having to compete with poor foreigners who would willingly do your job for less. As Gary Becker pointed out in The Economics of Discrimination, segregated labour markets - whether by citizenship (or gender or race as in the past) are good for the favoured workers, but bad for those kept out, for employers, and for consumers. (Immigration controls are estimated to cost the world economy as a whole tens of trillions of dollars - as much as 50-150% of global GDP - in lost productivity.) This underlying selfish concern to protect our privileged status is rationalised and moralised in the rhetoric of foreigners stealing our jobs (the same rhetoric previously applied to women and racial minorities).

It is not surprising that the political success of the social democratic project - as seen in the growth of welfare states in scale and ambition through the 20th century - was accompanied by the growth of immigration controls. The viability, legitimacy, and decency of any welfare state depends upon controlling membership to the society it is created to serve. That's what a real social contract looks like. Social democrats are always criticising the racist motivations for and practical inhumanity of the immigration controls demanded by conservatives, but their objections are superficial. Conservative orthodoxy allows the left to get away with the hypocrisy of depending on immigration controls while pretending that they are against them.