Almost No Disasters Are Natural 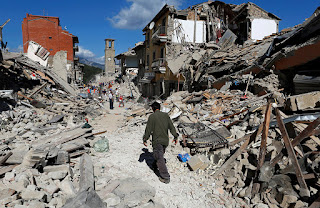 A natural disaster is a disaster because it involves a lot of human suffering, not because the event itself is especially big or spectacular. The destruction of an uninhabited island by a volcano is not a natural disaster, because it doesn't really matter to humans. A landslide doesn't matter, however enormous, unless there is a town at the bottom of the hill.

So what does the word ‘natural' add? We use it to demarcate the edges of responsibility. We don't use it very well.

Man-made disasters, like Chernobyl or Deepwater Horizon or Bhopal or Grenfell Tower, are ones acknowledged to have been brought about by human decisions. These disasters could have been avoided if certain people had made different choices. The suffering of a man-made disaster is therefore the responsibility of particular persons and institutions. They can be held answerable for their decisions: required to justify them and judged – and punished - if they cannot.

For example, the investigation into the Grenfell Tower fire will scrutinise in forensic detail the reasoning behind the key decisions that permitted a containable danger to be transformed into mass death; such as the installation of a flammable cladding, the absence of sprinklers; and refuge in place instructions for residents. Some decision-makers may face criminal charges for negligence. They will certainly be vilified in the tabloid press and hate-mobbed on social media. Organisations like the local council and the company running the building will likely receive an official shaming, fines, and compulsory reorganisation or dissolution.


In contrast natural disasters are supposed to have been caused entirely by forces outside human control. They were inevitable. No one can be held responsible.

Let's put that abstract point in the context of a real disaster. If the 2010 Haiti earthquake had been a genuine natural disaster then the vast death toll and destruction would have happened in every plausible world in which an earthquake of that size had struck at that time and place. Only then could we say that the 200,000 deaths were the inevitable result of the earthquake itself.

We can't test this claim directly by studying alternative worlds, of course. But we can analyse it by what we know of how this world works. It is clear that earthquakes of the same size affect humans very differently depending on where in the world they live. For example, an even more powerful earthquake off the coast of Chile a month after Haiti's killed only a few hundred people. Thus, there is a gap between the occurrence of the exciting natural event and the outcome we actually care about: all that human suffering. Specifically, earthquakes don't kill people; falling buildings do, and whether buildings fall on people depends on which polity they live in more than it depends on how close they live to an active fault line. It was not at all inevitable that an earthquake of scale 7.0 striking 25km from Port au Prince at 5pm on 12 January 2010 would result in the kind of devastation that actually occurred.

The best explanation of that gap is that people in different countries do some important things differently, and that this determines how similar natural events affect them. In other words, it is the decisions of human beings, including the institutions and rules their decisions set up, that decide whether a dangerous natural event produces a disaster. Poor quality building codes, zoning rules and enforcement seem particularly significant; together with poor logistical planning and preparation of residents to respond to the dangers raised by such natural events. The difference in the death rates for similar natural phenomena striking different countries demonstrates the difference that human choices make. It is a crude measure of how man-made a disaster really was.

At this point I should admit a caveat.* When Vesuvius erupted and buried Pompeii that was a genuine natural disaster. The Romans simply didn't know – in any plausible world - that such a thing might happen. So they could not have been expected to prevent the disaster, whether by setting up monitoring stations by the volcano and rehearsing plans for mass evacuation, or just moving the city somewhere safer. Some such genuine natural disasters may still occur, such as an asteroid strike, or an earthquake in a place that has never experienced one before. But these are remote possibilities. These days almost all disasters are man-made. Wilful ignorance is not innocence.

What is the upshot of this fact? Recognising a disaster as man-made initiates a search into the bad decisions that made it possible. Part of that is holding relevant agents responsible for culpable negligence and deterring such negligence in future. But it is also an opportunity to ensure that systematically better choices are made in future.

This kind of investigation goes wider and deeper than we are used to. President Bush's administration was widely condemned for its response to hurricane Katrina, as were local government agencies such as the New Orleans city government and police. Trump's response to the aftermath of hurricane Maria on Puerto Rico has added presidential obnoxiousness to bureaucratic incompetence. Such obvious failures of office rightly attract blame, but they should not take all our attention. Focusing on the response to Katrina may have been cathartic, a simple story with a clear villain helping the nation process a terrible event. However, it distracted attention from the deeper causes of the disaster: institutional incompetence in water engineering and urban development going back decades and applying far beyond the specific case of New Orleans. Those are the problems you have to fix if you want to stop American cities drowning every time a storm happens along.

These problems are not necessarily that difficult to address, or at least reduce, even by relatively poor governments. Cuba treats hurricanes as a civil defence issue and has a death rate from them that is a fraction of America's. Bangladesh's government has set up a sophisticated early warning and evacuation system: cyclones as powerful as those of 1970 or 1991, in which hundreds of thousands died, now kill a hundred times fewer.

Now it is true that many people already assume that all weather related disasters are man-made because of climate change. But this is another form of lazy thinking; like blaming everything on Trump. The fact that we have so many more newsworthy weather related disasters than we used to mainly reflects the vast increase in the number of people living in vulnerable places. Any contribution made by climate change is marginal: possibly increasing the statistical frequency of very large storms, i.e. making historically one in a hundred year events more common. But Houston drowned itself by expanding so recklessly: paving over the bayous that used to absorb the water from big storms, and building non-flood-proofed buildings in vulnerable floodplains. Thanks to bad human decision-making, a disaster was guaranteed whenever the next big storm came along. Likewise famines in the horn of Africa have far less to do with changing rainfall patterns than with government failures (and wars!) that permit problems such as the overpopulation of marginal arable lands to be transformed into mass starvation.

The problem of using climate change to explain everything bad that happens is that it blinds us to the real – remediable - reasons that disasters turn out as they do. Calling ‘Climate change!' at every hurricane, drought or flood reflects a morbid fatalism rather than scientific objectivity. We are all responsible, but not in a way that can help. It returns us to the unhelpful place we began, in which natural disasters are inevitable. Only now they are the inevitable outcome (or perhaps punishment) of humanity's fallen state of selfish overconsumption.

We should stop using the phrase ‘natural disaster'. (Almost) all such disasters are the outcome of the interaction of extreme natural events and poor human decisions. As humans we can review such interactions and recognise decisions that magnify or contain the inherent dangers of natural phenomena like extreme weather. And because we can make better decisions we are responsible for doing so. We have even developed special institutions for making and improving such decision-making on our collective behalf: government.

When a fridge catching fire causes an inferno in which 80 people die, we demand answers about how it was allowed to happen - so that it never happens again. We should do the same when government incompetence allows our cities to be flooded or shaken to the ground. And we should accept our own share of the responsibility not to be satisfied with easy answers - like flood insurance subsidies - and return to business as usual.


Notes
An earlier version of this essay appeared on 3 Quarks Daily.
*My partner deserves the credit for these counter examples.

This work is licensed under a Creative Commons Attribution-NoDerivatives 4.0 International License. Attribution: Thomas R. Wells is a philosopher at at Tilburg University. He blogs on philosophy, politics, and economics at The Philosopher's Beard.