The Political Economy of Tourism 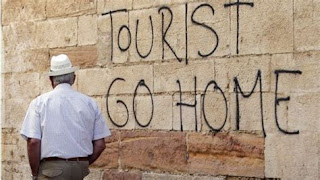 Tourism accounts for perhaps 10% of global GDP and 300 million jobs (source), though obviously much less at present due to Covid. Yet tourism has an awkward unloved place in most societies. Tourists are widely resented by many locals in the places they visit, not only because their behaviour is sometimes obnoxious but also because they are accompanied by businesses catering to their interests and tastes, like Airbnb rentals and expensive cafes. Jobs in tourism tend to be low-level, often seasonal hospitality services that don't feel very meaningful or prestigious (unlike manufacturing or finance).

I think some of this resentment is entirely misplaced, and other parts are misdirected. The central problem is a failure to recognise that tourism is an export industry. Your country exports things like cars or T-shirts or coffee beans to people in other countries in exchange for tokens (dollars, Euros, etc) that you can use to buy things they make. Tourism is where you sell foreigners things that can't be moved around the world; things that they have to come to your country to consume, like views of your beautiful coastline, authentic cuisine, and the famous paintings in your museums. The fact that cars and T-shirts tend to get made inside large ugly buildings on the outside of town while tourism exports are produced in the prettiest parts of the centre is irrelevant. The things that tourists buy are still exports.

Once tourism is recognised as an export industry at least some complaints about it should no longer be compelling. In particular the argument that tourism should be reduced because it prices locals out of their own neighbourhoods exemplifies bad economics. The resources needed to produce the goods that tourists want - like pretty buildings in the city centre - are in somewhat fixed supply. Once demand by foreigners is permitted, there will be increased competition for them and the resulting price may well be above what locals can afford. This may be sad for the locals who can no longer afford access to what they assumed was theirs by birthright. But from an economic perspective it is efficient because it ensures that those resources are applied to wherever and whoever can generate the greatest economic value from them.  There are also at least some returns to scale that benefit local residents, for example there will be far more and better equipped museums than the local population alone could support.

This is the story of trade in general: it allows a society to gain overall by maximising the value that can be achieved with its resources, but some individuals will lose out from the restructuring of the economy this requires. Once we recognise that tourism is a form of international trade the fact that some people will necessarily lose from it becomes clearer and possible to address. A caring society should find ways to compensate the losers so that everyone is a winner. However, while blocking international trade would maintain the status quo pattern and so prevent the emergence of one particular group of economic losers, it would only achieve this by keeping the whole society poorer than it needed to be. The group of people who would lose out from preventing tourism will be greater than those who lose out from it, and their interests also deserve to be considered.

However, not all resentment of tourism is unfounded. It is of particular significance that we recognise tourism as not only an export but also as an industry. Just as factories and agriculture produce an industrialised landscape that is often aesthetically displeasing and may produce damaging pollution, we should not be surprised that tourism also often looks rather ugly and can cause harmful and unnecessary side-effects. Like any industry, tourism can even destroy net value if it is poorly managed even while some of its business owners get rich. How can this happen? First there is the problem of undercounting the full costs that tourist businesses impose on others. Second there is the problem that individual businesses may be so focused on extracting as much cash from tourists that they destroy just what attracted the tourists in the first place.

Local residents may greatly value the beautiful place they live in, and in ways that go beyond the way that tourists could value it; for example, because it is their home and they feel a personal connection to its history and to the community they share it with. Much of this will be disrupted by a large tourism industry, for example as the price of housing rises and disrupts and scatters a community. If you voluntarily sell something of yours to someone else it is reasonable to assume that both of you are better off after the deal than you were before (or you wouldn't have done it). But not everyone affected by such deals will have the chance to accept or reject them, and so we cannot assume that they will be better off. For example, suppose I sell my plot of land to a developer who will build an enormous ugly hotel on it. Presumably we are both satisfied with the terms of the deal, but now all my old neighbours will have to suffer the construction of a building that will reduce their enjoyment of their homes. It is quite possible that my transaction has created a net destruction of value (i.e. that my neighbours together would have been willing to pay me more money not to do the deal).

Tourism seems rife with such failures to properly consider costs on 3rd parties, and there is also a significant political dimension. Tourism presents a wealth creation opportunity for those in the right legal position to take advantage of it (those with the correct kind of property rights) and a wealth destruction threat to those affected but excluded from these transactions. This allocation of property rights and their form is a political operation that determines which groups are able to defend and advance their economic interests. At the extreme, an underlying inequality in political power can translate into extreme economic inequality, such as happened in the centuries long enclosure movement whereby common land in Britain was privatised by politically privileged individuals (and converted to sheep farming), rendering large numbers of rural peasants destitute but without any rights to object.

But besides the possibility that the financial success of tourism businesses may be accompanied by a hidden destruction of economic value among the less politically privileged, there is also the possibility that even the tourist businesses won't be sustainable. This is because of a 'tragedy of the commons' effect between the privileged winners competing to extract as much money as possible from whatever makes a place so attractive to tourists. Every player in the market wants to capitalise on their access to this desirable good, such as a famous or beautiful city, to earn as much money as possible. But none concern themselves with the aggregate effect of their actions on the underlying source of their income. For example, that huge hotel may be ugly, but it is cheaper to build that way and the view from an ugly hotel is just as good, so it looks like a smart business decision. But it has ruined the view for everyone outside it - tourists as well as locals - and therefore greatly reduced the economic value of all neighbouring hotels. Unless some system of collective control can be put in place, the logic of unsustainable value extraction will continue to the point where tourists no longer want to come.

To sum up. In the case of tourism - as for many industries - one needs to take a political economy approach. A 'pure economics' analysis will miss out the key political dimension of undercounted economic interests and give a distorted view of success based on observable transactions. It will neglect the collectively irrational outcomes of individually rational business decisions. Nevertheless, a political economic approach is also fraught since it must produce its own estimates of the economic values involved and it has its own biases in how it does so. It can be dominated by boosters who expect to make lots of money from their newly valuable property rights. But it can also be dominated by locals making the bad (though understandable) argument tourism should be curtailed to save them from losing out to economic changes that will make the whole society better off.