Why is Heterodox Economics a Joke? 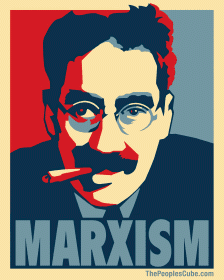 What is Heterodox Economics?

Heterodox economics are those approaches to economics that you don't see in university textbooks, classrooms, or high-level journals and conferences, but still call themselves economics (see here for more background). Most people haven't heard of most of them at all, though the Great Recession has increased their profile somewhat. These days their practitioners are usually found outside economics departments, scattered through the other social science departments (like sociology, geography, and business), or in the case of the lucky Austrians, rightwing thinktanks. In other words, they survive in niches that are less severely restrictive than academic economics about maintaining a single official style (subjects which aren't so 'disciplined').

Heterodox economics includes a number of old schools that were once mainstream but were long ago overtaken by the currently dominant neo-classical school (but not, their practitioners insist, made obsolete), like Marxist, Keynesian, Institutionalist and Austrian economics. There are also some younger schools, like feminist and ecological economics, that just haven't managed to get taken seriously by the economics establishment (partly because they haven't wanted it strongly enough, unlike e.g. behavioural economics - see my previous post) and so remain on the fringes.

Heterodox economics thus includes a variety of quite incompatible concepts and perspectives (Marxists and Austrians!). There has been some attempt to provide a positive identity based on a supposedly shared commitment to 'realism' (cf. Tony Lawson), but this strikes many as rather shallow and ad hoc. There are however some similarities between the different heterdox econ schools: a general concern with social structure and a resulting leftish political orientation (except for those libertarian Austrians); a distaste for, and lack of ability in, formal mathematical methods; and origins in the humanities (note that almost all successful mainstream economics approaches these days originate in the natural sciences).

But heterodox economics, as the very name suggests, basically defines itself in terms of a common negative: exclusion from the establishment. Heterodox economists can't apply for jobs in 'real' economics departments because they can't - or won't - do the kind of work that's expected there (especially the mathematical tricks). They have to publish in their own specialist journals which the Thomson Reuters citation index (typically, in the academic 'market for ideas', a monopoly) doesn't count as economics and so don't receive the attention and status of mainstream economics. This fundamental 'injustice' is at the core of heterodox economists' professional lives and self-identity.

Cognitive dissonance and the inferiority complex

Since heterodox economists are excluded from official paths to recognition as economists, despite believing themselves to be successful economists, they are subject to a certain degree of cognitive dissonance: when people's beliefs clash with their real situation, their beliefs adjust to compensate, but not always in the direction of reality. They declare that they are excluded from official institutions by devious means; that mainstream economists are suppressing the truth; that mathematical economics is the devil's work; etc. In short they can come out sounding like a bunch of crazy people you would never invite to dinner. (See for examples, some of the comments to this post.)

I remember once attending an Association for Heterodox Economics conference of about 150 very lonely looking people who seemed desperately fragile and in need of a hug. The conference appeared their (only?) annual opportunity to get validation of their identity as economists. 2 weeks later I went to a conference of experimental economists. They were markedly younger, brighter, more focussed, and more confident (smug even), reflecting both a more rigorous selection process and their field's position on an inside track to reshaping mainstream economics over the next 10 years. They had no time to talk to a philosopher because they had so many interesting questions to be getting on with already (they didn't need any more) and were quite convinced of the importance of what they were doing, the glorious future of their field, and the tenure-track positions awaiting them.

But the lack of recognition also works further harm. Since no one takes their work seriously except other members of their particular tiny sub-group, heterodox economists are not subject to much open-minded review. They can't really tell whether their work is good, and is being ignored out of laziness or malice, or whether it is actually completely wrong not worth anyone's attention. They can't tell if they are intellectually bankrupt or merely insolvent.

It's the ultimate academic nightmare, and unsurprisingly it takes its toll. Perhaps this explains my observations of heterodox economists' intense emotional oscillations between tremendous hubris and deep depression (sometimes from one moment to the next), and their intellectual turn inwards as they resolutely refuse to engage with the contemporary economics mainstream that refuses to recognise them.This makes it very hard to offer any constructive criticism, since it is often seen as an attack, while the isolationist mentality leads to an increasingly erratic and dogmatic style of thinking. One finds, in short, a kind of existential inferiority complex.

Since heterodox economists are marooned on the fringes of mainstream academic economics, fragmented in organisation and with their members scattered through business, sociology and geography departments and even wider afield, it is not surprising that their core economics focus goes somewhat adrift, or that they take support where they can find it. So what you find on this fringe is what you always find on a fringe. A few extremely smart people doing great and important work that might one day change everything, surrounded by an enormous number of followers of extremely mediocre abilities and an unusual proportion of wingdings. I recall a paper, since published in one of the more prestigious heterodox journals, seriously arguing that neo-classical economists were all rigid autistic control freaks because their mothers weaned them too early (even their mothers couldn't love them!). Another, recently advertised in the official heterodox economics newsletter, concerned the important issue of what Marxist theory could reveal about the truth of the 9/11 US government conspiracy (discussed in a previous post).

Because heterodox economists realise they have no chance of being taken seriously they have a permanent opposition mentality. And not the 'loyal opposition' of parliamentary democracy: against the present policies, but in favour of the country itself. Many of them cheered as the credit crisis appeared and cheered louder with each further economic deterioration. On the one hand, it is easy to see why heterodox economists are so excited by disaster: it is the only opportunity they have to get any serious attention, when the stranglehold of mainstream economics on the public, academic, and policymakers' understanding of the economy is briefly shaken. On the other hand, that's not necessarily a goal - them being seen to be right - that the public can share. We'd rather keep our jobs. It also seems to discourage the academic virtues of careful and responsible analysis. As the old joke goes, 'Did you know that Marxist economists have predicted ten of the last three economic crises?' It's hard to see how people who act like this may be taken seriously in the future, once they have embraced their anti-establishment status as their own positive identity.

This analysis may seem harsh, even cruel. But it is mainly a criticism of the style of heterodox economists these days rather than the value of their ideas. I also don't mean to imply that mainstream economics itself is perfect! Mainstream economics could be much improved by greater pluralism and an influx of different ways of doing things, if only to keep it on its toes (why didn't the neoclassical models see the credit crisis coming?). In fact this is already happening right now in the elite graduate schools and journals where the future of the discipline is really decided [see my post on Economics and the Crisis]. New approaches are appearing in the twilight of the neoclassical hegemony and competing to reshape the field for the next 20 years. They include such relatively well-knowns as behavioural, experimental, and neuro-economics, but also many others, such as complexity economics and evolutionary game theory. These are indeed exciting times for the mainstream!

But heterodox economics is in no fit state to contribute to this reshaping (see here for a similar analysis by David Colander, more politely framed). Its inward turn may make sense as a (psychological) survival tactic, but it has cost heterodox economists the ability to be taken seriously by open-minded mainstream economists, of which there are many. When heterodox economists do meet them they tend to focus on what is uppermost in their minds: telling mainstream economists that their whole approach is wrong (often confusing them with 'neoliberals'); that their mathematical orientation is stupid ('autistic'); and that they have unjustly suppressed/oppressed heterodox economics schools (although mainstreamers have probably never even heard of them). That is surely not the correct attitude to take if you really want to persuade the powers-that-be that your ideas are worth incorporating into their thinking. It may seem unfair that you are not the powers-that-be, but that is the situation you have to work with (especially if you claim to be a 'real-world' economist).

Heterodox economists must recognise that they have no a priori right to be taken seriously, but instead try to think like sellers in the marketplace of ideas who must persuade the customer to part with his shilling (or in this context, his valuable attention). They must court their possible buyers assiduously: pay close attention both to the customer's problems (not those of heterodox econ) and what's going on generally in mainstream econ (know your competition if you want to beat it); provide products in a form that meets the customer's requirements (e.g. in mathematical form); and above all, smile.