Why Are Moral Philosophers So Bad At Global Justice?

There is a dismaying intellectual sloppiness to how moral philosophers as an intellectual community approach issues of global justice. They are not only ignorant about basic, important, and easily checked empirical facts, but also complacent about their ignorance. For example, they disdain to acknowledge the expertise of those scientists (especially economists) whose conclusions or methods they find counterintuitive or disagreeable, and prefer to develop their own theories or seek out those self-professed experts who say things more in line with their beliefs about how the world works. The result resembles the self-sustaining but fundamentally worthless anti-vax or anti-climate change epistemic communities. Philosophers are willing to write long articles and whole books explaining their views about how unfair the world is, and to read and respond to each others' complaints, but they have little to offer to those outside their bubble.
This shit matters. Bad global justice theorising reinforces anti-intellectual and conspiratorial myths about how the world works that would keep whole countries and hundreds of millions of people mired in poverty. On the one hand - fortunately - few people in positions of influence take this drivel seriously. On the other hand this is still a missed opportunity to have engaged philosophers' supposedly superior reasoning skills and expertise on value questions about issues affecting billions of people. Moreover, it still pollutes the well by training our students and anyone else who will listen to be stupid about global justice, for example reinforcing the apparent intellectual legitimacy of populist 'common sense' opposition to free trade and other sensible policies.
Two myths about how the world works are particularly significant drivers of this failure of philosophy. Many people believe them, often unconsciously. But many people are not philosophers. We are supposed to do better.
1. Two Worlds Myth
This is the notion that the world is strictly divided into two parts, the rich (North) and the poor (South). While that picture was somewhat true in 1970, it no longer reflects reality. Most people do not live in poor countries or rich countries, but in (Asian) middle-income countries in between. It is shocking that people who claim to be so deeply concerned with the terrible state of the world have not bothered to check a 50 year old worldview for updates. (Try the Gapminder Quiz to check how well your own view of the facts fits with reality.) 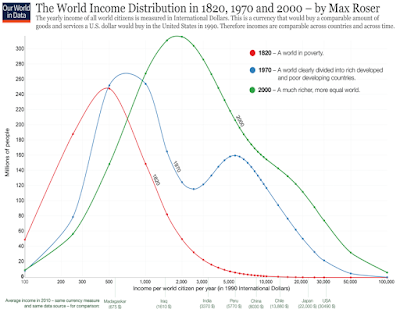 The Two Worlds myth misleads philosophers' thinking in various ways. But especially important is the way it leads them to understate the agency and responsibilities of middle-income governments. There are still a billion people living in very poor, appallingly governed countries and that is terrible and they need help (e.g. a Global Basic Income) and much of that help should come from rich countries because they are the ones who can most easily afford it. But most people now live in countries that have the resources and governance capacity to help themselves. For example, these countries have pharmaceutical companies capable of manufacturing Covid vaccines under license, or can afford to buy them at the market price. Many of these middle-income countries, like India, could eliminate their remaining poverty if the political will was there, often merely by reallocating their existing social spending away from wasteful subsidies. It is a grotesque moral failure of Indian politics that there are still around 200 million Indians living in extreme poverty (as is its recent turn to Hindu supremacy). Asserting that India's failures are the moral responsibility of rich world governments or rich world citizens is massively arrogant and patronising. It is a direct holdover from a colonial worldview. 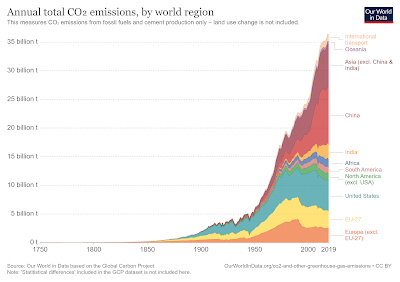 Moreover, middle-income countries are increasingly implicated in global problems from climate change to overfishing and must be part of their solution. (China's CO2 emissions, for example, are now twice America's and triple the EU's; emissions from many other South countries are also rising rapidly.) This requires working out the specific moral responsibilities of these countries within the cooperative schemes of the global community of nations. All this nuance remains invisible to those moral philosophers who continue to see the world in black and white terms of rich countries that get to act (for better or worse), and poor countries who merely suffer, passively waiting to be saved.
2. The Limited Good Myth
An astonishing number of people - even those with university degrees - seem to see the modern economy as a zero sum competition. In such a zero-sum world the only way for some to get richer is by a transfer from others, who will end up poorer. This myth naturally makes many moral philosophers sceptical or cynical about capitalism and anything economists have to say about its effectiveness in promoting mutual prosperity. When they hear of prosperity they look about for the crime - like colonialism or sweatshops or environmental despoliation - that will explain how it was taken and from whom. They are therefore unable to recognise the astonishing achievement of capitalist values and institutions - despite their moral failings and ugliness - in bringing exponentially better lives to billions; cutting global extreme 'Malthusian' poverty from 90% of the world's population 200 years ago to less than 10% today. Some don't see the exponential growth curve at all. Others can't see its value because the moral crimes of capitalism loom so much larger in their minds than its benefits. They lack a sense of proportion. 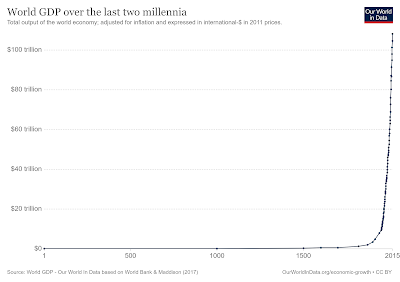 One important consequence of this prosperity blindness is a profound anti-empiricism that shades into anti-intellectualism. A good many moral philosophers seem honestly to believe that mainstream economics is some kind of right-wing conspiracy against the global poor merely because it takes capitalism's success seriously. Not only do they think they know better than the experts how an economy works, they feel competent to go shopping for heterodox economic theories that fit their own intuitions about how an economy (should) work. Instead of being ashamed of their ignorance, they double down and read each other reading Marx. They thereby trap themselves in a hermeneutic cul de sac of scholarship that goes round and round in a circle of subtle interpretations and theorising without ever being tested with facts.
A second consequence is an overemphasis in moral analysis on relational fairness aspects rather than quantitative (consequentialist) ones. This follows from the no-progress worldview produced by the combination of the Two Worlds and Limited Good myths. If progress isn't possible then the important challenge is the fair distribution of what we have. Once again, capitalism looks especially bad in this light. But beyond that, an emphasis on fairness leads to a focus on negative rather than positive analysis, because in the domain of fairness only failures are interesting. I think this is why moral philosophers are so concerned with discovering ever more things that may be problematic, but, unhelpfully for practical decision-making, not how much they matter.
Disregarding the quantitative dimension also seems to make philosophers overly loss averse and attached to the status quo as a normative benchmark. In the complicated real world almost any policy intervention or rule change will produce losers (e.g. free trade) and that fact should not enough to condemn it. If you are structurally unable to consider costs and benefits in a quantitative way your intellectual posture will be purely reactionary. You will be opposed to any change but only for the arbitrary reason that it is a change. If the policy had already been implemented you would also have opposed its removal.
****
I am not saying that moral philosophers should be more like economists. They should be asking different questions than economists about how the world is doing and how things could go better, and including consideration of qualitative dimensions like fairness and broader views of consequences than the economist's preference satisfaction. But my worry is that many moral philosophers talking about global justice are not really exercising their full powers of careful and wide-ranging analysis. Instead they often seem to be unleashing their pre-existing 'common sense' misunderstandings of the world onto the page and then bringing in theory later, to join the dots. How these myths persist so easily in philosophy departments but not in economics is unclear. I suspect it has to do with philosophy's relatively lower ideological diversity, unworldly disdain for facts, and a preference for qualitative analysis (the kind that focuses on why/whether questions) rather than quantitative analysis (the kind that focuses on how much questions). In any case, philosophy needs to do better.
Note: Special thanks due to the wonderful people working on Our World in Data, an extraordinarily valuable global public good.