Don't Pity the People of the Future 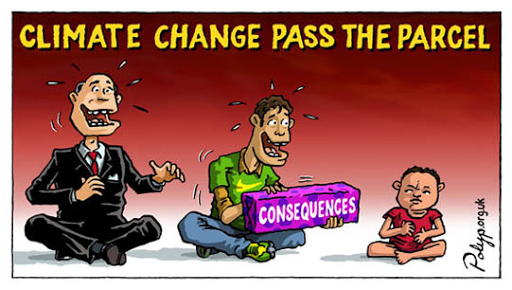 Climate change is such a terrifying large problem that it is hard to think sensibly about. On the one hand this makes many people prefer denial. On the other hand it can exert a warping effect on the reasoning of even those who do take it seriously. In particular, many confuse the power we have over what the lives of future generations will be like - and the moral responsibility that follows from that - with the idea that we are better off than them. These people seem to have taken the idea of the world as finite and combined it with the idea that this generation is behaving selfishly to produce a picture of us as gluttons whose overconsumption will reduce future generations to penury. But this completely misrepresents the challenge of climate change.

Here is a thought experiment that may help. Suppose you have a one-shot time machine that will take you 200 years into the past. Suppose further that Dr Who time travel rules apply: you can change the past without paradox. If you are brave enough to make the trip, what would you take with you?

After some reflection, most people would opt for things which would be useful to people living in 1820, or useful to you if you had to live in that time. For example, technological products such as antibiotics (and the recipes to make more) and knowledge about science and history that would make you well placed to help those living then, or help you to have a very successful life amongst them.

Now consider what you would take with you if you were travelling 200 years into the future instead of into the past.

Most people are a bit stumped on this. It is hard to think of anything we have now that could be of much value in the future, any more than we can imagine someone from 1820 having anything to offer us. (With the possible exception of the nostalgia value of authentic 21st century antiques). The reason for this is technological progress, which transforms resources into things worth having at greater and greater efficiency. Our global civilisation can be understood as a giant machine learning algorithm for finding new ways to meet our needs with less human effort and scarce resources. See for example the evolution of the cost of lighting over human history, from firewood to tallow candles to oil lamps, gas lamps, incandescent bulbs (where the graph ends) and now super-efficient LEDs. Where once it might have taken over 60 hours to gather the wood to burn to provide 1,000 lumens of low quality flickering light, now we can turn night into day at the flick of a switch for a fraction of a second of our labour, and with a fraction of the resources previously needed and their environmental impact. 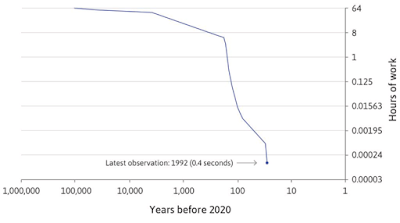 The point is that while climate change will impose significant costs on future generations, this must be considered as a shift from one growth trajectory to a somewhat slower one. If we fail to mitigate climate change sufficiently then our descendants will surely be much worse off than they would have been if we had got things right. But they will not be worse off than we are so long as our global civilisation persists and continues to supply the institutional context and incentives to drive technological development forwards. Humans can grow food in vertical farms and build cities on the sea or under it if we have to. And we will be able to afford to do such things thanks to the economic surplus generated by our ability to do more with less every year than we did the last.

In other words, our present generation is an integral part of two distinct processes. One is the overproduction of greenhouse gases that endangers our climate stability and generates huge costs for future generations (and ecosystems and non-human species too). The other is the production of human prosperity through a relentless cycle of technological development. On the one hand, it is by that very technological development that we gave ourselves the problem of climate change. On the other hand, the well-being of future generations (and their ability to overcome challenges like climate change) depends on the continuation of that technological development. Our control over these two processes gives us tremendous power over future generations, but it doesn't make us especially privileged with respect to them. Like every generation since the industrial revolution we are the unluckiest ever born, except for all the ones that came before us. We should feel a moral responsibility to those who will come after us, but we need not feel sorry for them. For we can expect that their lives will be as far different and better than our own as ours would be from those who lived in the 1820s.