If We Could All Be Good For Just One Day….It Wouldn’t Make Much Difference 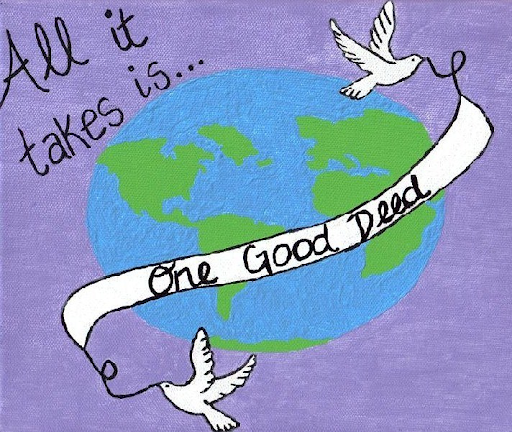 Suppose that we could all be good for just one day. No one would be tempted away from doing the right thing and towards their own selfish interests or illicit urges. No one would be afraid of retribution. We would be free of all internal and external obstacles to being good. What would happen?

Some good things would happen and would last beyond one day. For example, dictatorships would collapse into rubble. If no one would do evil or allow evil to be done for just one day then the thugs would stay home (or join in) while the people took back their country.

Some other nice things might get done. People might take the day off work and spend it doing good deeds like picking up the garbage in their neighbourhood. This wouldn’t last since the effects of those deeds wouldn’t last (it is easier to dismantle something evil and build something good). But even in their own right these good deeds probably wouldn’t amount to very much. This is not only because there is only so much that can be done in one day, but also because most important things require cooperation and coordination to achieve. We wouldn’t know which of the many possible good things to try to do, in what order, or to what extent. Should we give our life savings to Oxfam? Should we go adopt a cat from the shelter? Should we volunteer to teach English to recent immigrants? Where should we start and when should we stop? Merely acting on the intention to be good is not enough to actually do much good.

A further problem is that moral disagreement would persist. It is not just weakness of will or fear that keeps us from doing what is right. Lots of people hold mistaken moral beliefs (e.g. that breaches of gender norms ought to be punished) or have mistaken beliefs about how the world works that would lead them to use their moral freedom to do wrongful things (e.g. QAnon followers might flock to Washington to set Trump back on his stolen throne).

The general point here is that many people think that morality is personal, a matter of resisting temptations and doing the obviously right thing. In fact morality is complicated and that makes it a collective and institutional affair with an unavoidable political dimension. In order to be good we need to cooperate with others around shared plans of action; sometimes very large and complex plans as in the case of eliminating poverty or reducing climate change. This requires creating institutions with the responsibility, resources, and authority to organise the bringing about of the things that we agree seem most valuable. In other words, meeting our moral responsibilities to each other requires doing politics and government well, and these are long-term projects in themselves that cannot be built in just one day.