How Many Children's Lives Is That Worth? 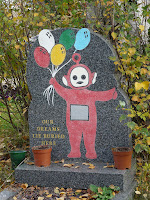 According to the meta-charity GiveWell, the most effective charities can save a child’s life for between 3 and 5,000 US dollars. One way of understanding this figure is that whenever you consider spending that amount of money, one of the things you would be choosing not to spend it on is saving a child’s life.

Take the median of the GiveWell figures: $4,000. I propose that prices for all goods and services should be listed in the universal alternative currency of percentage of a Child’s Life Not Saved (%CLNS), as well as their regular prices in Euros, dollars, or whatever. For example, a Starbucks Frappucino might be priced at 5$ /0.13%CLNS. A Caribbean holiday cruise might be priced at $8,000/ 200%CLNS (perhaps written as emojis🪦🪦)

The justification for this would be to fix a gap in the way the price system functions. Normally we make our consumption decisions entirely in terms of a consideration of how much we want something and how much we can afford, a matter of prudence only. As economists have analysed, such exercises in constrained maximisation are all we need do to enjoy a flourishing economy since by responding to prices we automatically take into account the social cost to others of resources being used for what we want rather than for something else (so long as some wise and non-self-interested government steps in to correct for externalities).

Occasionally it is questioned whether merely responding rationally to the information revealed by prices is enough. For example, perhaps we should also be pushed to take account of the impact of our choices on non-human entities by explicit ethical warnings on animal products (previously).

Publishing prices in percentage Child Lives Not Saved corrects a different gap in the information that prices communicate. There are many people whose needs are left out of the information communicated by market prices because they are not economically significant enough for their interests about how the world’s resources are used to compete with ours. They are literally too poor to matter to the world economy, and so we will not notice that we are neglecting their needs unless our attention is specifically drawn to that point. The invisibility of the poor is a consequence of global inequality. In itself there is nothing wrong with global inequality, which results merely from the fact that different countries have managed to different degrees to institutionalise the market focused rules and rights that generate economic growth and have made so much of the world so very rich over the past 200 years. People in rich countries should not be ashamed that we are rich while others are poor, for our wealth has not come at the expense of the poor (as the exploitation theorists mistakenly claim - previously). But we should be ashamed for acting as if the poor don't exist.

An unfortunate consequence of global inequality is that the needs of the poorest people in the world are drowned out by the better-funded but less important interests of the rich. Even our cows and SUVs are ranked higher in the economic status system that determines the distribution of the world's grain than the hunger of the world's poor. Setting prices in the universal alternative currency of Child Lives Not Saved is an important - though crude - way of reminding all of us of the existence of the needs of the global poor and how they relate to our own choices. Whether we act on those needs remains up to us.

The Child Lives Not Saved currency can be used in other contexts too.

1. The full moral opportunity cost of things should be clear to people even when they are not acting as individual consumers but for example in their political role as citizens. Therefore government spending should also be expressed in terms of how many children's lives it could have saved. Many projects that could be justified on their own terms - or to keep key political constituencies happy - would no longer seem so plausible.* Here we take advantage of the fact that the metric of children's lives has a direct moral significance that is much more readily politicised than arcane calculations about percentages of GDP or changes in the average household's consumption spending.

How many children should die so that we can keep polar bears from becoming extinct?

2. Lots of people have nice-sounding ideas about what we should do or care about to make the world better. Unfortunately many of their proposals display a lack of quantitative thinking, which makes their proposals very hard to evaluate. They tend to focus on defending the value of a particular thing they care about - such as specific conceptions of fairness relating to gender or race, ecosytems, liberal arts education, the welfare of non-human sentient life - and drawing out the inference that that thing should be enhanced or defended. However, what we need to know to make a sensible decision (as a society or as an individual) is not whether these things have some value in their own right, but how much value they have compared to other things. We can't do everything that is worth doing; we can't act on every value! We must choose some actions rather than others and to do so rationally we need to be able to compare them in some systematic way.

Again, the metric of children's lives provides a crude but handy device for comparing proposals for making the world better. Demanding such quantitative accountability from people who think their ideas are so important that the world should act on them seems reasonable. At the least, it provides an opportunity to broaden the conversation from why their pet cause is a good thing to why we should act on it and not any of the other things that matter.

Notes
* An important caveat should be added here that is also relevant to the evaluation of the effective altruism movement behind charity comparison shopping websites like GiveWell: life-saving interventions don't scale well. The $4,000 figure for saving a child's life refers to the easiest to save lives in very poor countries, and there are a limited number of these super cheap lives, and a limited number of child deaths in total (around 6.5 million people under age 20 die annually). For example, Britain's extremely generous energy subsidy programme, designed to keep voters happy until the next election, may cost £100 billion per year. This subsidy has an opportunity cost of many hundreds of thousands of child lives not saved, but not 28 million.